I’ve always drawn and painted. At the same time, I was a college student, US Navy sailor, drummer in a rock ‘n roll band by the name of “The Redcoats” which made a bunch of records, toured, and worked with Dick Clark. Later on, I became a corporate account executive (where I admittedly doodled a lot), then I partnered with my wife Debbie in an antique business. I founded “The Finishing Touch” which, for over 20 years, was dedicated to restoring historic interior wood finishes. I have a son Jeff and daughter Jana, both born in the mid-60’s.  Both are happily married with grown sons of their own.  After 40 years of a loving partnership, I lost my sweet and brave Debbie early in 2011 to cancer.

With no warning, in 2014, I found myself getting better acquainted with a girl who I had known back at the Club 86 in Geneva NY. She came frequently to dance to “The Redcoats” when we performed there in the late 50’s. Some 56 years later, Carole Santelli and I fell in love. I moved to her part of the world (Tampa Bay Florida area), we purchased a cottage on a pond and exchanged wedding vows in September 2014. 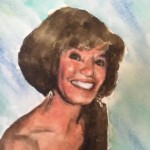 Carole brings to our union a family of her own; 2 grown daughters Nicole and Christina who, between them, are raising a mix of 6 growing boys and girls. Christina’s oldest, Samantha, is attending college. Carole and I are pouring a great deal of energy and time in to the renovation of our new home. It has only brought us closer together.

Painting is an extremely important part of my life. It is a passion, which will, God willing, will carry me to the end of my time here. 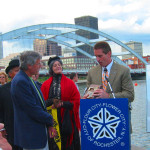 A painting of Jim’s featuring the Susan B. Anthony and Frederick Douglass Bridge, entitled “The Spirit of the Genesee”, was featured at the bridge’s opening.  Mayor Bob Duffy presents Jim with a Key to the City in appreciation.